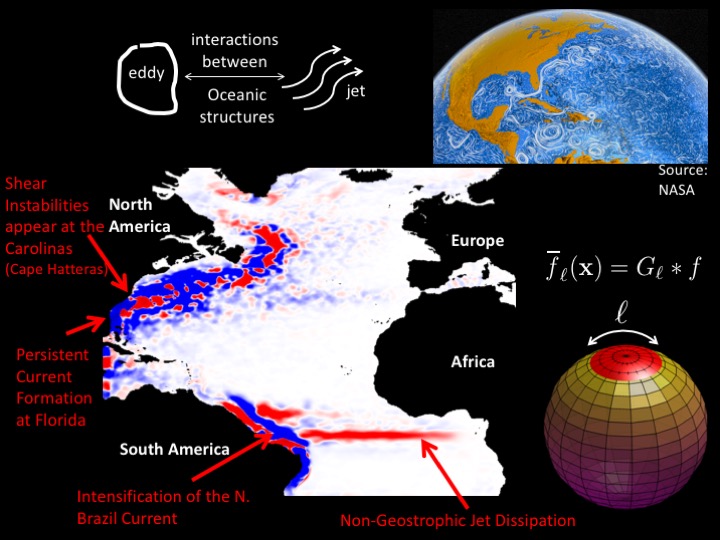 Nonlinear processes and complex flow in the Ocean

Welcome to our group's website. In my professional and personal life, I have always been averse to lumping myself and others into simple categories or to using labels. I believe that (tribal) identity can be limiting. I try to keep an open mindset and to learn from different fields. Our group's research falls under the broad umbrellas of fluid dynamics and nonlinear science, with a current interest in problems from oceanography, astrophysics, high-speed flows, and inertial confinement fusion as an alternative energy source.

The techniques and approaches we use in my group range from careful high-performance computing to analyzing data from satellites and experiments, and from semi-empirical physical reasoning to abstract mathematical analysis and proving rigorous theorems.

Here I attempt to provide more information about our activities. If you have any questions, please feel free to contact me at
husseinrochester.edu or +1-585-276-7170.

Shikhar was awarded a travel grant to participate in the FilaChange workshop on ocean processes and climate change, to be held Aug. 29-Sept. 2.

Hao was selected to participate in the Argonne Training Program on Extreme-Scale Computing (ATPESC) , to be held July 31-August 12, 2022 near Chicago, IL.

Shikhar was selected to participate in the Boulder Summer School on Hydrodynamics Across Scales.

Hussein was selected as one of two Young Observers by USNCTAM , which represents the mechanics community on behalf of the US National Academies.

Hussein is on leave at Stanford for the spring semester.

Hussein will lecture at the Boulder Summer School on Hydrodynamics Across Scales. Deadline for student applications is January 15.

Ben was offered a Research Associate position in our group in Mechanical Engineering to start in Feb. 2022.

Fernando was offered a Scientist position at DOE's Laboratory for Laser Energetics to start in Sep. 2021.

Hussein has been elected Vice-Chair for the APS Topical Group on the Physics of Climate.

We have been awarded ~$13 million to establish and host a multi-institution NSF Physics Frontier Center for Matter at Atomic Pressures (CMAP).

Ben and Shikhar have been selected to attend Geohackweek 2019 in Seattle, Washington.

Hussein will give an invited talk at the APS-DFD meeting in November.

Nitish has been selected to attend the HED Summer School in San Diego.

Hussein is on leave at Princeton for the spring semester to collaborate with colleagues there.

Shikhar Rai will spend his summer at Los Alamos National Laboratory to collaborate with colleagues there.

Xin Bian has been accepted to attend a "Big Data" summer school hosted by the University of Prince Edward Island, Canada.